Awash in concrete exercises in those oh so necessary, urban exorcisms of modernity (cold-cast in concrete, carbon, and steel), The Fencemen walk a crooked avenue somewhere betwixt colloquial rock abstractions and post-punk maturation…somewhere within ennui and exile.

Birthed in the winter months of 2010 but now long since vanished and absorbed into other musical endeavors (or, in some cases, early retirement), The Fencemen hailed from Lansing, Michigan, and featured members of Small Brown Bike, Biddy/Biddy/Biddy. What transpired therein consisted of raucous bouts of hollow-bodied guitars, drums, multiple voices, organs, tenor saxophone, and bass, with the occasional accompaniment of assorted horns, tambourines, foot-stomps, and strange, conspiratorial missives. And as their “Century Blues” somewhat-plaintively intones, “This ain’t no concession, this here is a hundred years of light,” suggesting some alternate dawn where the dormant industrial wastes of Middle America once again find their place at the table.

Times Are Alright is a self-released exercise in the exploits of used-up, hollow individuals in hollow modern environs, and its sister-release, the More More More More Monuments EP, is an exploration of brutalist architecture, the American railway system, and the sagging gables of urbanity. It has been quietly argued that, “While minor chords and edgy timbres run rampant like the rats and jackals [their compositions] describe, neither the music nor the message are ultimately glum. Supported by an undertow of optimism, the album is a sonic representation of the band’s rustbelt hometown – industrial and downtrodden, but with the resolve to come back swinging harder and stronger than before,” a fair appraisal of activities now extinct.

The Fencemen were Jared C. Nisch, Mike Reed, Daniel Jaquint, Michael Teager, and Tyler Mitchell Blakslee, who highly encourage you to sunbathe with the liars and fill the modern towers with your modern love. 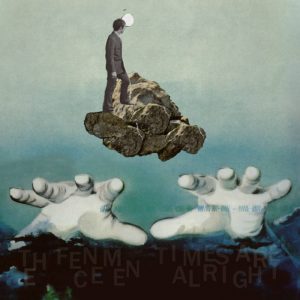 The Fencemen – Times Are Alright