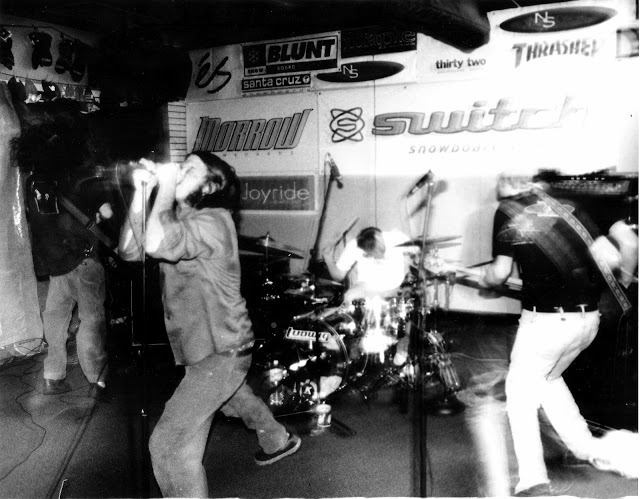 In a sense, the earliest, most inconscious impetus for Down Peninsula Audio can be traced to a gloomy evening in early 1995 when a sixteen-year old Sean H. was shuttled to a punk rock abode called the Hamtramck House to see The Suicide Machines perform in a basement. The Machines, mere months away from signing a major record deal, were the uncontested kings the local ska-punk scene. The basement was packed with their fans. Yet it was not this basement skank-fest that entranced our protagonist but what was happening in the living room, where a group of young, shaggy fellows set up their vintage instruments and began playing in protest to all that was happening below. Their music was fuzzy, a blur of chaos and incomprehensible screaming barely held together by a kinetic rage quite antithetical to the sing-alongs about boogers and skate shoes happening a floor beneath.

Our protagonist had no objection to The Machines.

It was simply that prior to this dreary evening his engagement with punk music had been a lonesome endeavor restricted to his four-track cassette recorder and the darker entries of the SST mail order catalog, and this… whatever was unfolding in the living room… was in some way kindred to his spirit, even if he’d never before heard such a racket. It was hard to tell one song from the next; or if these even were songs. It was a sound, a freakout, and these strange fellows appeared rather possessed in a way our protagonist very badly wanted to be himself. In between their tantrums, their rail thin guitarist hurled insults and resentments toward the audience below, to which the bassist responded by twiddling his tone knobs and looking very much on the verge of a nervous episode. The singer appeared infinitely frustrated by some issue that seemed beyond whatever was amiss in the house; the drummer apparently just wanted to bash his cymbals. By the end of their set, our protagonist was the only person left observing the band (little did he know he would soon find himself in this exact predicament numerous times in the near future). They never announced their name, but rather ended their performance with a guitar/bass feedback squall that carried on as the guitarist and bassist went to smoke on the porch.

“What was the name of that band?” our protagonist asked an unfriendly blonde person sitting in the nearby kitchen before a stack of records-for-sale.

“Stupid name… my brother’s the drummer.” He pointed to a 7” record, the cover of which bore the Wallside name, and said, “It’s okay.”

Our protagonist bought this record hastily; he held it close.

This was revelation, this new knowledge that humans in the humble state of Michigan were playing shows in dilapidated houses and releasing records that sounded like primal therapy sessions set to distorted guitars. Sure, he’d seen Fugazi, The Laughing Hyenas—and maybe even Rollins Band—but here were souls who seemed within reach, who might inform him how such things could be made manifest. He began listening to the record each morning before school, and stalking Wallside shows, including one during which they were booted off stage after a single song so that an Elvis impersonator could do his diligence before a crowd of policemen and their families. Similarly, he went to see a band called Mainspring, which featured the same drummer as Wallside, and their set ended after a single song when the guitarist had a full-on, mouth-foaming psychiatric fit and walked out of the building. Every time he went to see a Wallside-related band, some drama or unforeseen calamity seemed to intervene.

It was obscenely unprofessional; self-sabotaging, even.

All of this only stoked our protagonist’s desperation.

He wanted very badly to befriend these mutants. The obvious solution was to create one of the “zines” he’d spotted at these shows, a ruse by which he might convene with the band under the guise of an interview. This meeting was arranged via a telephone number inside the record’s sleeve. It happened in the basement of drummer Matt’s parents’ house. The interview was serious, severe, probing the existential nature of the band’s intentions, their conceptual framework and lyrical themes, and it must be said that the personalities on display during this intense exchange proved to be analogs from which those involved would, in a sense, never really stray:

“I’m the hardcore kid, and Scott’s the punk kid, and Aron’s the grunge kid and Josh… Josh is the booger kid,” said drummer Matt before carrying onto to talk about practical aspects of his record label and the band’s future ambitions as guitarist Scott twitched and interjected rude corrections to his drummer’s overarching interpretations while bassist Josh sulked a bit, perking up only to reference in non-sequitur fashion a Night Ranger cassette he’d cherished as a young boy and singer Aron seemed to swagger at the periphery, appearing quite impossible to impress until the subject of the Dischord Records’ band Hoover arose.

They released a second 7” and a featured a song on the coveted Council Records compilation The 26th. By this time, inspired by these fellows, our protagonist had formed a band of his own called Thoughts of Ionesco, whose first shows impressed Wallside enough that they invited the nascent group to join them on a summer tour of the United States of America. It would be the first of numerous ventures the bands would take together, not because they sounded anything alike but, rather, because they shared an aggravated, contrarian view of the music scene and seemed to relish in their alienation and mutual ability to send the small audiences to whom they played running for the doors. Many times, each band watched the other play to an otherwise empty room, and they did so all over this troubled country, in a time before incessant documentation and photo snapping; it just the two of them—seven young men in total—playing abusive, unhinged guitar music to no one but themselves.

Perhaps we’re remembering things through a blood-and-shit-smeared lens, yet to be fair there was occasionally blood and shit, and vomit, too. (The average age, after all, of these participants was roughly eighteen.) And there was also, every once in awhile, a miraculous alignment of energies during which some demented, far-flung audience would take to these bands collective ethos and join with them in their rituals, dancing naked and sloshing warm beer and rolling around on the filthy floorboards and if everyone got very lucky the band members would bed down right there on the very floor where the show had taken place and pass out only to awake the following morning and board their vans for the next mission.

All of this was stimulating for our protagonist, who sometimes due to bad behavior was exiled to the tour van for a night’s sleep while the others enjoyed the comforts of an apartment floor. Wallside didn’t judge our protagonist, and only years later would he be grateful for their leniency and understanding.

But let it also be known that Thoughts of Ionesco foisted upon Wallside the task of recording a Black Sabbath track for an exclusive compilation of Detroit-area Sabbath covers. Let it be known that certain members of Wallside, in their punk rock purity, objected to this task and cast aspersions at the forefathers of heavy riffs and satanic rock! And let it be known that upon completing their rendition of “Tomorrow’s Dream” the band Wallside exhibited a salient increase in their sonic heaviness and compositional maturity, a factor that lead to their much-treasured set of songs on Side A of the Wallside/Shag Van Club split 12”.

Yes, among these fuzzy punks lurked a burner element not even snazzy, ballcap-wearing drummer Matt could suppress. Their hair grew longer, and things they smoked in their pipes may have begun to change color! Singer Aron’s poetry of rage and Midwestern ennui became even more impressionistic, even more pointed at individuals he despised (and to read his lyrics was to suspect he might be secretly despising you). Josh began indicating with his basslines that he might be approaching the league of players like Lungfish’s Sean Meadows, although the influence of his truest hero, Cliff Burton, might also have begun to shine through. The only true pop fan among them, guitarist Scott organized the band’s songs so that there was some modicum of hook while Matt Gorton perfected his caveman-on-caffeine beats. On good nights, you could even tell what song they were playing, assuming they wanted you to.

Was it drummer Matt joining Jihad? Was it the eternal brotherly love/spite between Scott and Josh that sometimes caused them to battle wickedly? Did the touring antics of Thoughts of Ionesco and the abuses to Wallside’s Ford Econoline, The Paddy Wagon, begin to take a toll on their collective spirit? Did singer Aron really want to be in a grunge band?

Because on the cusp of one of their breakups, Wallside remineralized to finally record a full-length album, From The Sky, which consummated their crusty scream-jangle vision and, it must be said, laid the blueprint of what was to come in Matt and Aron’s next band with the Sabbath-infused “Chasing the Dragon.”

Or that’s how our protagonist sees it, anyway, his impression both biased and warped and for these reasons probably spot-on.

Wallside were not a good band.

But they were great in a chemical way, an interaction of brotherhood and youthful purity that, put in simplest terms, money could never dream of manufacturing. Your band, for example, was not as good as Wallside; even if yours could play circles around them, you still lose… Our protagonist assures this! Scott would go onto to sling his rock riffs in The Cleveland Steamers and Bang Bang. Aron and Matt would spend a few years in Inside Five Minutes. Josh, whose services as a drummer and bassist would soon be in demand, would play in more bands than even our protagonist can name, even if several of them were his. In fact, our protagonist would, for decades to come, make music with all of the members of Wallside, most often without any pretension beyond attempting to catch a little of the magic he first witnessed in that Hamtramck living room.

Such is the gift of music, when one strips away the bullshit—a thing Wallside might have done best of all. 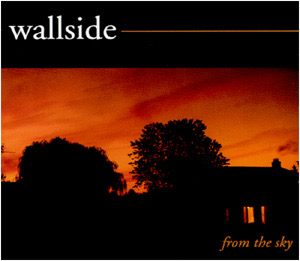 Wallside – From the Sky